Murray, KY – American Legion Post 73 is offering Veterans the opportunity to file applications for the Honor Flight Bluegrass program.  This is a program where Veterans are flown to Washington, D.C. and get to see many of the monuments in our Nation’s Capital.

Service Officers Mark Kennedy and Lois Wells will be available on the second Thursday of each month from 1:00 PM – 4:00 PM and every Tuesday and Wednesday during the same hours to enroll Veterans in the program.

Honor Flight Bluegrass is currently scheduling for flights in April and June.  The applications are all electronic/computerized now and Kennedy and Wells will ensure that applications are filed by computer.  This is a first come, first served program and no appointment is required.

Congratualtions to Jackson Boone, who is the High School Oratorical Champion for the Department of Kentucky!!

That means that the First District – primarily Post 73 – has helped sponsor the State Champion 3 out of 4 years now and we had a second place finish in the 4th year.  The credit for these achievements go to the guys and gals that volunteer to help judge, monitor, escort and serve food at the contests.  Thanks to each of you for the hard work you put in! 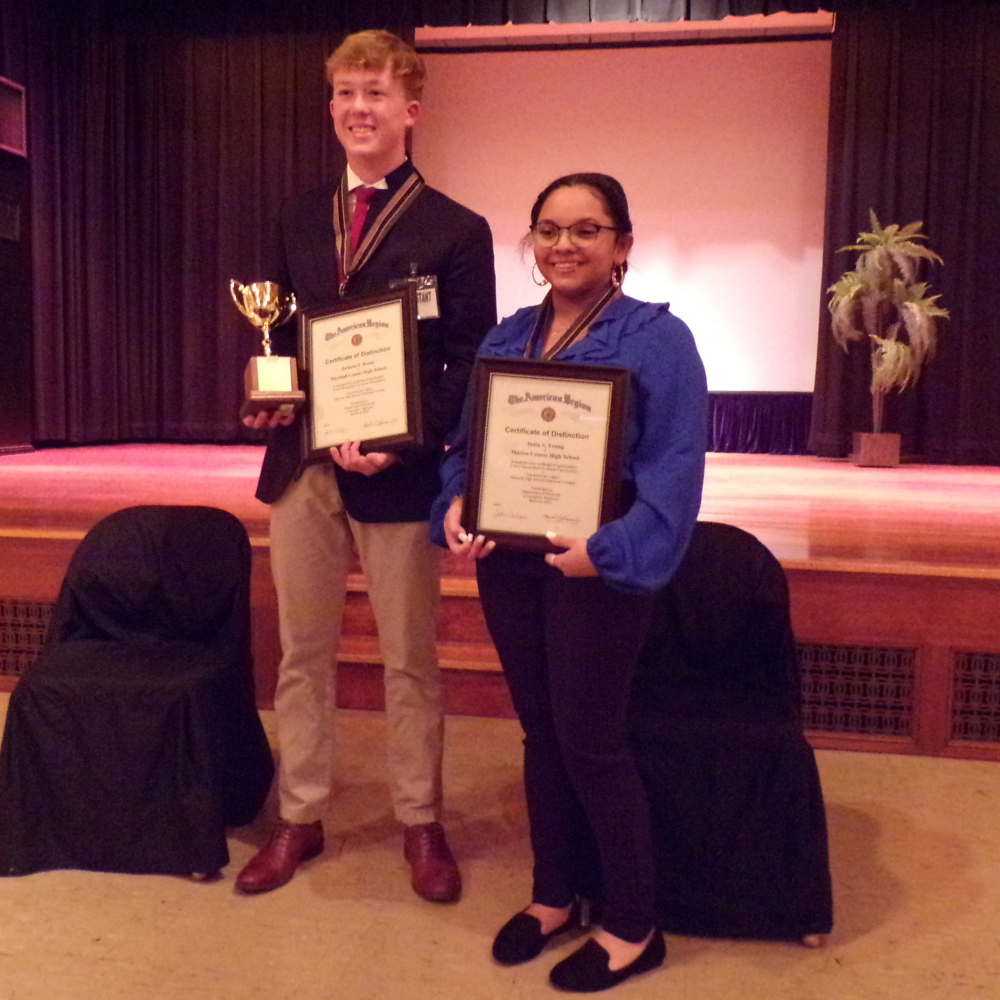 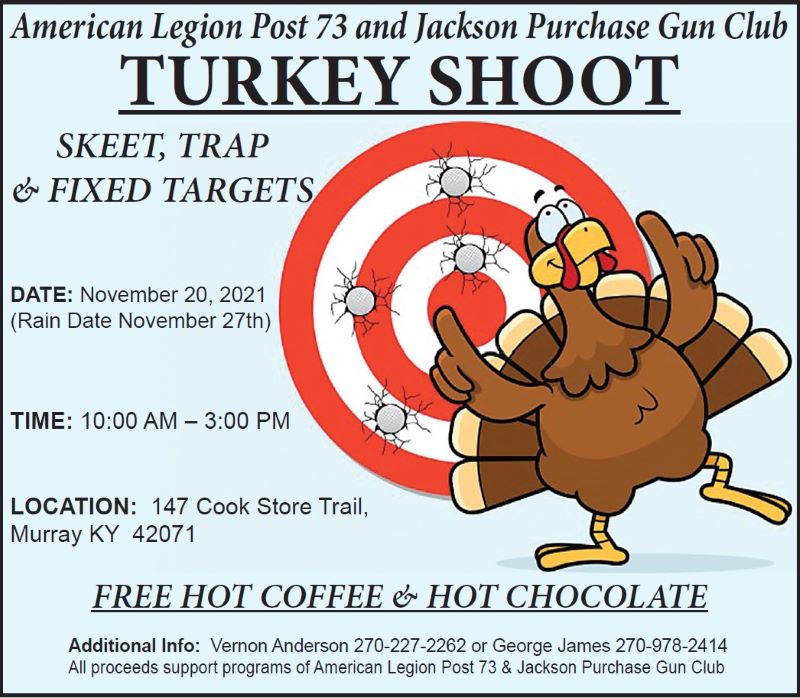 The American Legion Post 73 will host a variety of activites in recognision of Veterans Day.  Doors open to the public at 10:30.  Please come join us in recognizing Veterans on November 11, 2021

Guests are encouraged to also attend the Calloway County Court House for the hanging of quilt to honor Veterans as well as the Woodmen of the World Veterans Day parade.

The bids for the burial vaults are now closed and the winning bid announced at the meeting tonight.

Thank you to all who participated and supported this effort.

American Legion Post 73 has been donated the deed to two (2) adjacent vaults at Murray Memorial Gardens Cemetery in Murray.  They are in the chapel mausoleum and are numbers 117 and 116.  As you go into the chapel, go to the left side and towards the front of the chapel.  The vaults are on the lower level and they both have plaques that say “Hargrove.”  These vaults are valued at $7,400,00 EACH.

Post 73 is going to auction the vaults – both of them together – to the highest bidder between now and the night of our meeting for the month of October – the 28th – at 19:00.

Reserve Price:  A minimum bid of $5,000.00 for both vaults together is required to be declared the successful bidder.

Mark Kennedy and Lois Wells will maintain a tracking log that shows the name, date, time and bid amount of each bidder – both emailed and in person.  This listing will be treated as “CONFIDENTIAL” and only Mark Kennedy and Lois Wells will know the bids.  Mark and Lois shall not be allowed to bid unless the Reserve Bid of $5,000.00 dollars is not met during the bidding period and then the offer will be advertised and posted community-wide and they shall be allowed to bid.

The high bid amount (without a name listed) will be posted each Wednesday on the office door at Post 73 by 15:30 and will also be posted here.

Good luck to everyone.  This is a great deal for whomever is the successful bidder!

Murray, KY – American Legion Post #73 of Murray plans to celebrate the 100th anniversary of the post on August 14, 2021. Bill Cowan, Commander of the post, states that it was chartered by the Department of Kentucky on August 14, 1921.

“We are planning an open house to commemorate this milestone,” Cowan says. “ We will open our doors from 10:00 am – 5:00 pm on Saturday, August 14th to the public and all Veterans in an effort to show who we are and what we do in our community,” Cowan said.

Cowan says that Post 73 has operated continuously since 1921 with levels of membership from 660 at the onset of WWII to about 125 members today.  “Veterans have consistently recognized that the American Legion is the foremost Veterans Service Organization and there are more than 15,000 local posts throughout America and over three million members who continue to serve America, fellow Veterans, their families and the youth of our community,” Cowan asserted.

According to Lois Wells, Event Coordinator of Post 73, there will be several activities for the public to enjoy.  “We will open our doors at 10:00 am and will have guides to show people the post exhibits and explain what we do every two hours util 5:00 pm,” she said.  “We will provide free hamburgers/cheeseburgers, hot dogs, chips, tea, lemonade, bottled water and sodas starting at noon and continuing until 5:00,” Wells said.

In addition to displays and tours, the post will conduct a “Silent Auction” for several items and will have tables with books for donations of $1, $3 or $5 and other items like service plaques, framed prints, quilts and more to serve as a fundraiser for Post 73 scholarship and service projects.

Wells emphasized that the public is invited to come by and enjoy this opportunity to learn about Post 73.  “There are very few businesses in Murray, or any community, that have been around for 100 years and Post 73 is proud to have served the needs of Veterans and our community for that long,” she said.

Our van runs to the Marion VA Medical Center every Tuesday of each month.  Riders must call our message board at 270-761-8728 no later than 13:00 the Monday prior to the Tueaday appointment.  Riders must provide the following information on the message board:

You will be contacted after 13:00 on the Monday prior to the appointment to comunicate the pickup time and place.
(Note: we pick up at Post 73, Hardin park & ride and the Mayfield VA clinic)

If you know a vertan who needs this service, please share this information with them.  It can save wear and tear on your vehicle, saves the cost of fuel, and perhaps even a free breakfast...

The American Legion Department of Kentucky Area “A” division of the 85th Annual National High School Oratorical Contest was conducted on Sunday, February 14, 2021 at the Lee S. Jones Convention Center in Eddyville, Kentucky.

This year’s Champion for Area “A” is Jackson T. Boone.  He is the son of Michael and Jill Boone of Calvert City and he is a Junior at Marshall County High School.  Jackson’s winning Prepared Oration was titled “If Only the Founders Could See US Now.”  Jackson competed as the winner of the First District competition and has earned $900 for his efforts.  In addition, he advances to the Department (State) contest where he will compete for a $2,000 first prize and the opportunity to advance to the National Championship at Indianapolis, Indiana where he will compete for $25,000, 1st; $22,500, 2nd; and $20,000,3rd place prizes.

The second-place winner of the 2021 Area “A” contest is Jonna A. Clayton.  She is the daughter of Amanda Barnett of Madisonville and she is a Senior at Hopkins Central High School.  Jonna competed as the Second District Champion and her Prepared Oration titled “Dignify the Nation by Gun Education” garnered her a total of $700 on prizes.  Amanda plans to attend college next year and is striving to achieve the highest standing she can in her senior class. 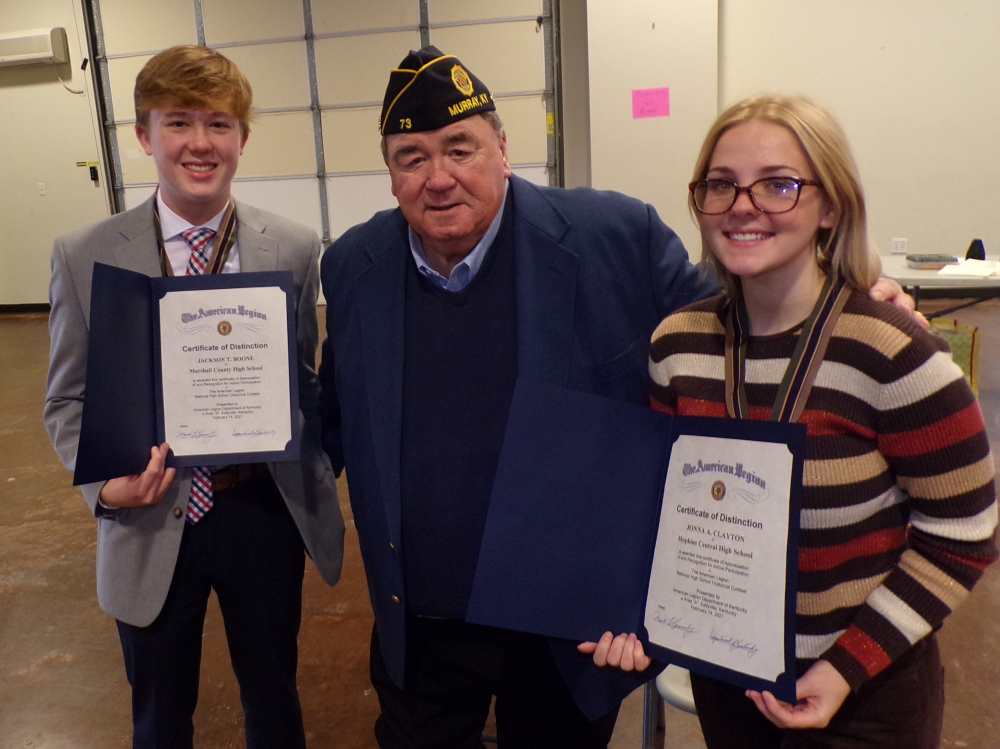 Jeff and Megan Frederich are pictured presenting the 2021 “Carli” Award to Jackson Boone.  The award is presented to honor the American Legion First District Oratory Speech Contest winner. Jackson is a Junior at Marshall County High School and the son of Michael and Jill Boone of Calvert City.

The Carli Award is named for Carlissa Frederich, the daughter of Jeff and Megan Frederich, who won the 83rd Annual National American Legion High School Speech Scholarship Contest.  She was the first female from Kentucky, the first from competitor west of Louisville and only the second ever national champion representing the Commonwealth of Kentucky. 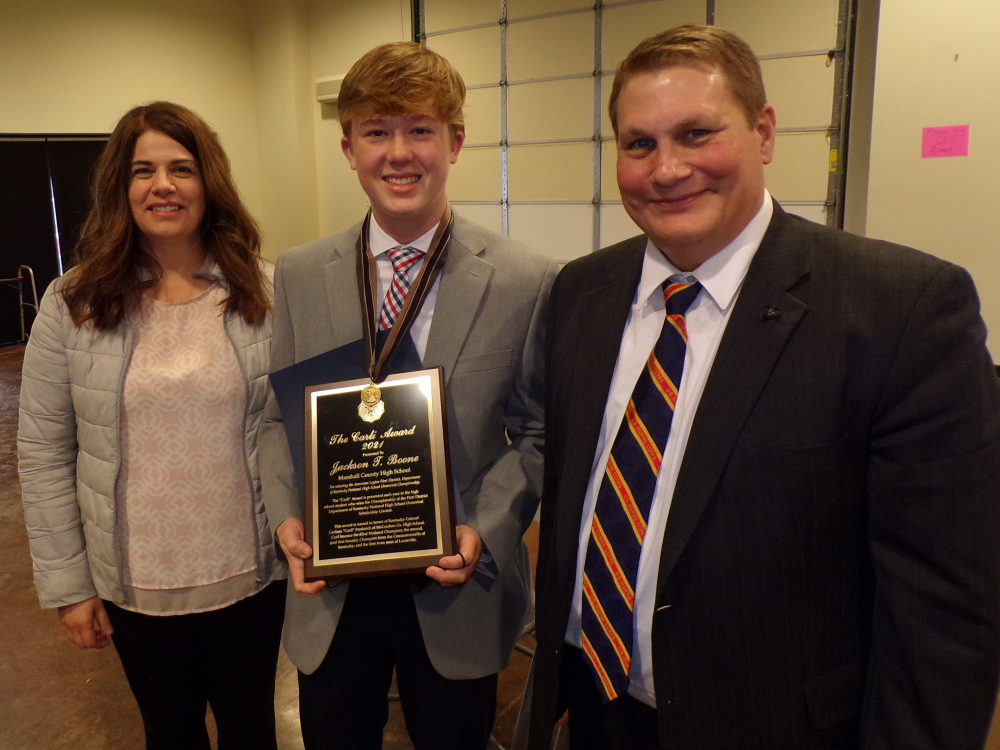 Bill Cowan, Post 73 Commander stated that the owners and staff of Quest Fitness, through their “Journey to Freedom” initiative during 2020 was instrumental in the scholarships for students who participated in the contest.  “We would not have been able to provide the scholarships this year, due to the COVID pandemic, if local people and businesses had not stepped up and helped us raise the funds,” Cowan said.

Post 73 Service Officer Mark Kennedy echoed the sentiments of Commander Cowan.  “We are proud to present the Quest Fitness folks with a Certificate of Appreciation for their support of American Legion programs and the youth of our community,” Kennedy said. 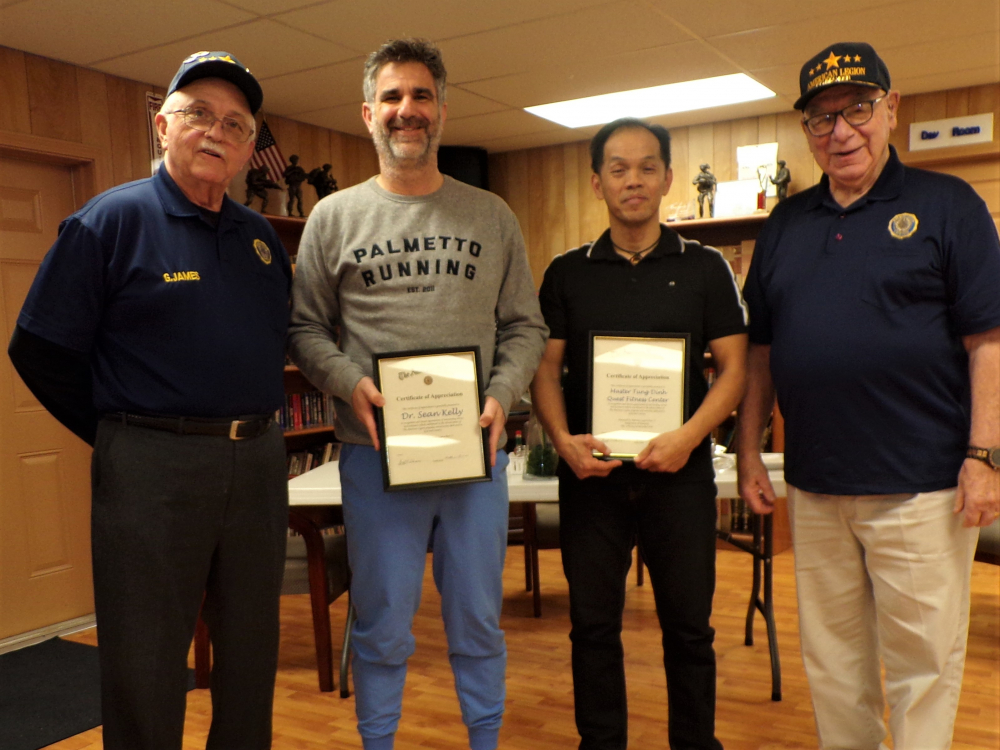